Rosario Murillo calls for the abolition of sanctions against “colonial powers” 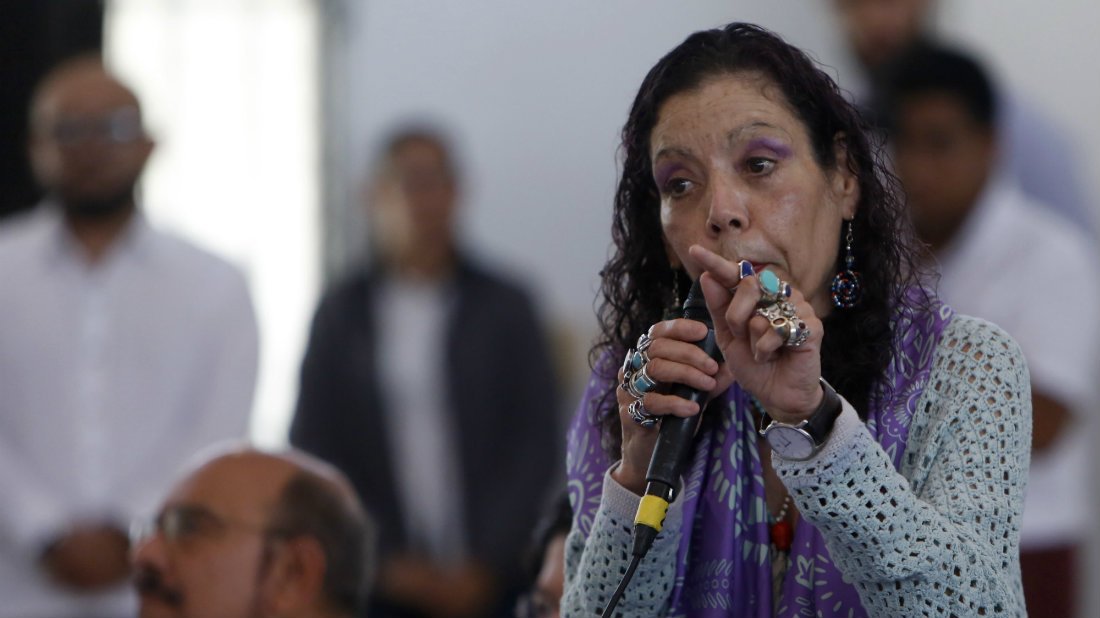 On Monday, December 6, the first lady, government spokeswoman and designated Vice President of Nicaragua, Rosario Murillo, called for the abolition of all coercive measures by “colonial powers”, in an apparent reference to sanctions imposed by the United States and others. The states have imposed on the officials of the Ortega regime, and even on themselves.

“They demanded respect, they demanded the abolition of those coercive and illegal measures that are inconsistent with international schemes that should, in terms of law, coexistence and respect for those schemes, govern the destinies of the world, and Eliminate those illegal coercive measures that have nothing to do with goodwill and have nothing to do with democracyIn his noon speech via the official media, Murillo said that it is only a matter of selfishness, arrogance and ambition to continue to dominate and subjugate the world of colonial and neo-colonial powers.

The regime spokeswoman began her claim by claiming that Russia’s Deputy Foreign Minister, Sergei Ryabkov, always makes “emphatic, clear and strong statements” and added that it “always refers to Nicaragua demanding respect for our country (…) respecting all states and peoples for internal and national processes and demanding respect for participation in All international forums.

Sanctions have been imposed on Murillo as the vice president-designate by the United States, Canada, the European Union and the United Kingdom, and the measures include asset freezes and immigration restrictions.Therefore, the first lady has mobilization restrictions in countries that impose sanctions. In other words, the Vice President cannot travel to the North American country, Canada, or to the countries of the European Union; Germany, Austria, Belgium, Bulgaria, Cyprus, Croatia, Denmark, Slovenia, Spain, Estonia, Finland, France, Greece, Hungary, Ireland, Italy, Latvia, Lithuania, Luxembourg, Malta, Netherlands, Poland, Portugal, Czech Republic, Republic Slovakia, Romania and Sweden.

In the same way, high-ranking officials of various state institutions and the high command of the police and army of Nicaragua were punished.

On November 27, 2018, under the administration of former President Donald Trump, the US Treasury Department through the Office of Foreign Assets Control (OFAC) sanctioned Murillo, which it referred to as endemic corruption, the dismantling of democratic institutions, and human rights abuses. Rights and the exploitation of public resources in Nicaragua for personal gain.

As a scope of the penalty, the Treasury has announced the prohibition of property and all financial activities related to Murillo Zambrana in the United States and entities under the jurisdiction of that country’s financial system. It has also been added to the OFAC blacklist.

You may be interested in: The United States imposes sanctions on Rosario Murillo, the heart of the dictatorship, and Nestor Moncada Lau for corruption and human rights violations

And just 24 hours later, on November 28, Nicaragua’s vice president was punished under the penal code Global Magnitsky Act of the United States.

Seven months later, on June 21, 2019, the Canadian government imposed sanctions on Murillo, in response to serious and systematic human rights violations committed in Nicaragua. At the time, Canada claimed that it was imposing sanctions on key members of the Nicaraguan government under the Special Economic Measures Act.

Since then, the first lady of Nicaragua has been declared inadmissible to Canada under the Immigration and Refugee Protection Act. In addition, they blacklisted it for any transaction – in effect, an asset freeze – by banning people in Canada and Canadians outside Canada from engaging in any activity related to any property of that person or providing services to them. financial or related.

See also  They found the remains of a terrifying "flying dragon", the largest pterodactyl in ancient Australia

On August 2, the Council of the European Union imposed sanctions on Murillo Zambrana and seven other officials of the Daniel Ortega regime in Nicaragua, including one of his sons, Juan Carlos Ortega Murillo. The 27 EU member states have frozen Murillo’s assets; Furthermore, EU citizens and companies are subject to a ban on making funds available to them and travel, preventing them from entering or transiting EU territory.

Murillo was sanctioned by the European Union as Vice President of Nicaragua, First Lady and Sandinista Youth Leader. According to President Daniel Ortega, half of the power is shared by Rosario Murillo, as the EU document explains. These sanctions were extended on 11 October until 15 October 2022.

Read also: The European Union imposed sanctions on Rosario Murillo, Juan Carlos Ortega and six other officials of the regime

The EU asserts: “It played a crucial role in encouraging and justifying the suppression of opposition demonstrations by the National Police in 2018. In June 2021, it openly threatened the Nicaraguan opposition and lost the credibility of independent journalists.” He adds that Murillo is, therefore, “responsible for gross violations of human rights, the suppression of civil society and democratic opposition, and the undermining of democracy in Nicaragua.”

According to the UK, the grounds for sanctioning are because there are “reasonable grounds to suspect that Murillo, in her position as Vice-President, had the power and knowledge to suppress demonstrations and political activities supported by the state; repress civilians, including through their leadership in the Sandinista Youth, and discredit Independent journalists and candidates are excluded from the electoral process.

He refers to Murillo as being “responsible for undermining democracy and the rule of law, suppressing civil society, democratic opposition, and human rights abuses.”