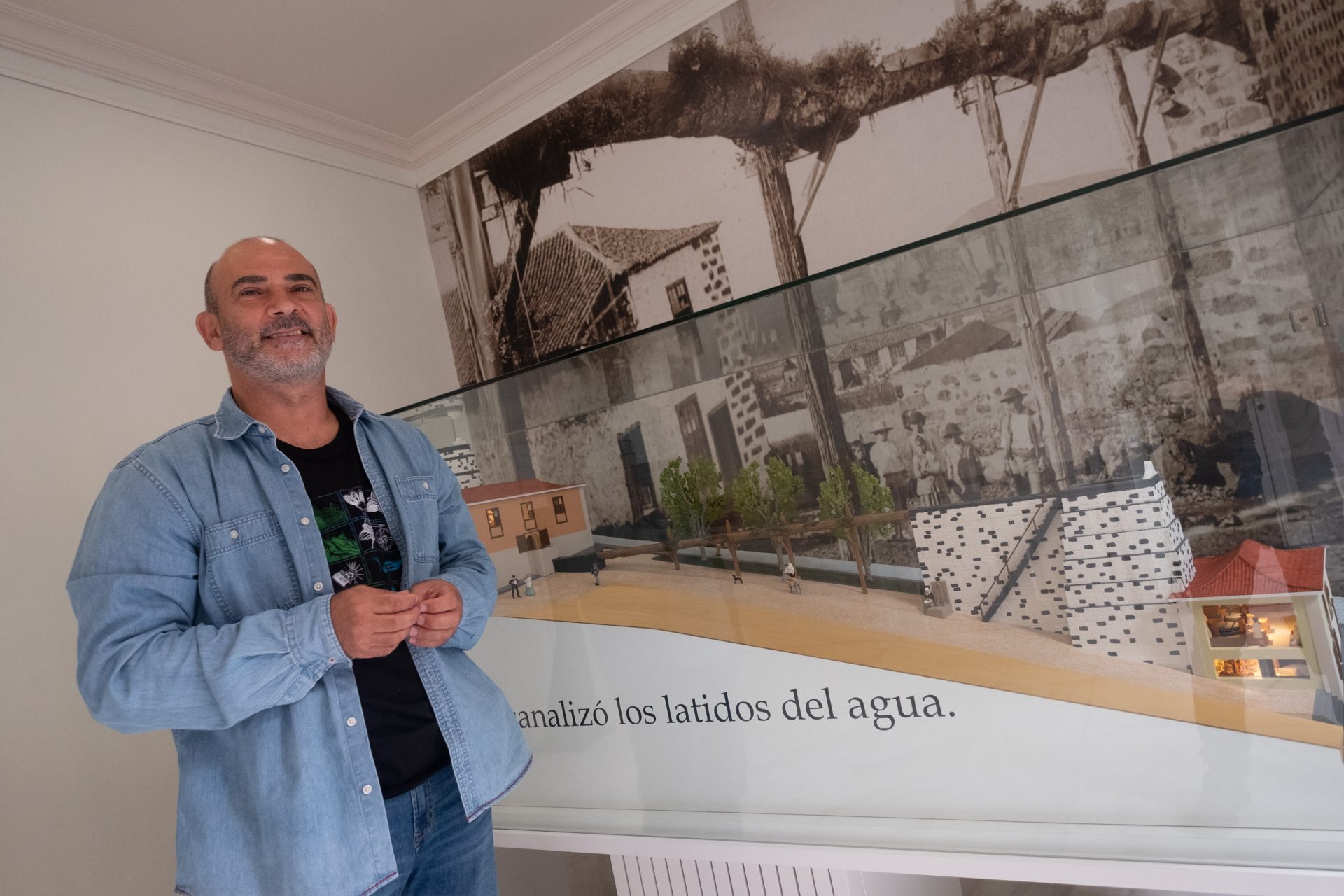 It was in 1991 when professors from IES Villalba Hervás and Rafael Arozarena, both located in La Orotava, decided to hold a symposium on the history of science. The success of subsequent editions led to an idea that gradually developed and consolidated eight years later with the creation of the Fundación Canaria Orotava de Historia de la Ciencia (Fundoro), an institution dedicated to the promotion of studies, education and the dissemination of the history of science, especially in those aspects relating to the Canary Islands. It is based at No. 17 in the middle of El Calvario Street and its business has not stopped growing in recent years. Its director, Miguel Ángel González Exposito, says that those responsible to them have consolidated important projects. “We are determined that our work reaches as many people as possible and that is why we organize workshops, exhibitions, seminars, conferences and symposia, that is, we diversify as much as possible because we are clear that we have to expand,” he says.

– Do you think that the institution reaches the community or is it still somewhat elitist?
“That’s what we’re trying. We recently checked that we’re at what we haven’t been before, because there was a perception that the institution was somewhat elitist, and that it was designed only for intellectuals. We tried to fight that idea and that feeling because it’s not true, science is a legacy. Everyone and our challenge is to reach large segments of the population. And modestly, I believe, in recent years steps have been taken in that direction. Now people come and contact us who have not done so before, and activities are originating from other places, such as city halls, which They take us into account for their cultural weeks, or neighborhood associations, who ask us for an exhibition. This has never happened before. In other words, we are not ignoring our origins but are convinced that our work should spread, because the history of science is a discipline that may be familiar even to people who are not academically trained An example is the travelers of the eighteenth and nineteenth centuries who came to the Canary Islands. There are people in their families who have always heard of the companions of Ted’s expeditions and when they see an exhibit and you talk to them about it, there is always someone in their family who has heard something about it.”

Why did it take so long to reach this goal?
“Because it is difficult. In all institutions, there is a period of consolidation and it has cost Fundoro a lot because it is an entity that depends on public institutions and convinces them that the investment they make here is profitable from the point of view of the interest that the citizens will get. It is complex.”

I understand that when you talk about the history of science you are referring to science in general, and not to a specific discipline…
“The advantage of the history of science is that it is an interdisciplinary subject. Our activities are attended by a diverse audience, from linguists, philosophers and historians to chemists, mathematicians and biologists, to name a few. In other words, there is no discipline because precisely what the history of science does is fight that, against barriers that separates or specializes people in the world of ideas.This is why our message is that the history of science should serve as a link between different subjects, but also between different sectors.In this sense, we saw with pleasure that the institution became a meeting point between secondary and undergraduate faculty, This is difficult to find in other areas, because they work separately. However, with the projects that we develop here, such as the Canarias otra Mirada exhibition, which is on display in Madrid until October 28, we have a collaboration between both.”
-The model of the water mills displayed at the entrance to the headquarters of the institution, which makes the living history of the city closer to the citizen, has anything to do with the adaptation of the discourse that the institution seeks?

“Actually, because it’s a familiar sight. People pass by the headquarters and don’t know what the institution is, but they stop and go in to see the model. They are neighbors of the city and they know what’s there. This was one of the goals, to make the different businesses accessible to everyone. It’s all about discovering the things we organize, Because sometimes you think they are unpleasant activities but believe them because you don’t know them. Be careful, I’m not saying that everything we do will captivate everyone, but there may be something that might be of use without knowing it, and it is our duty to spread it so that it is available to all citizens” .

– Where does Fundoro get the resources to be able to organize activities?
“We are an entity of public interest but we operate through a Board of Trustees that governs us and is made up of four institutions: the City Council of La Orotava, the Council of Tenerife, the University of La Laguna and the Government of the Canary Islands. The way they control us. In other words, we take the activities that we propose to the Board of Trustees to see if It was approved or not, because the resources with which we implement the projects come from these institutions. The headquarters, for example, is owned by the City Council of La Orotava, which last year gave us the ground floor allowing us to expand a little more. We are now equipping there a group A museum related to travelers who visited us in the eighteenth and nineteenth centuries.It will coexist with the model of the mills because we want to use it as a ‘hook’ for people walking into La Orotava to see the exhibition.The latter aims, in a series of rooms, to immerse the people who visit us in the economic and social context in which travelers found themselves upon arrival in the Canary Islands There will be nautical charts of time, antique objects and boards In November the first room will open, an interior recreation of the cabin of a 17th century ship And there we’ll represent the mapping and navigation room. Later, we’ll add other units that show what volcanology and geology were like when these travelers arrived, botany and zoology, landscapes, and society. It is about giving a general idea of ​​what travelers found when they visited us. Specifically, the goal that drove us to bring the Canarias otro gaje exhibition to Madrid was to enhance a bit of how we see the Canary Islands from the outside, as there is not only the sun and the beach here, but also the culture and part of it relates to what the travelers did at the time.”

Is science done in the Canary Islands?
“Not what we would like, but it has been done. There are sectors and working groups that are doing very interesting things, but we only remember science when we have a very complex problem at the top. Now, with the COVID-19 pandemic, everyone is turning to science to beat this and the same thing is happening. With the Cumbre Vieja volcano. There is ignorance in many areas, in geology, for example. Among other reasons, because in secondary schools this subject has been completely excluded. Thus, we realize that the population ignores, for example, many aspects of Volcanic Mechanism Although we live on volcanoes.It is believed that in general culture it is necessary to know, for example, who wrote Don Quixote, but not who Newton or Einstein was, and who did such basic things as Beethoven’s music.This is due to the fact that It is necessary to generate that science is part of the general culture and that scientists not only had to communicate their work. Not only do they have to do this, but they also have to do well, even if the topic is complex. How can the population be expected to intervene in a discussion about the use of Stem cells if they don’t know n What is a cell? This is why our goal is to convey that science is not something enclosed and watertight, but that it is interconnected and accessible to all. They kept calling us, until the message got through.”

Are initiatives such as the science fair necessary to reach out to the community?
“It is absolutely essential because it includes the population and when you give a show, there are more possibilities to reach out and get to know it. La Orotava City Council has long been promoting cultural activities that include people on the basis of the belief that they can also be happy in promoting culture, because it gives A feeling that it comes down to leisure or watching TV or football matches which is important. Real. But we also defend and believe that pleasant situations and some fun can be accessed through cultural events.”

Does the organization have future challenges?
“Keep on reaching the whole community, because we are not settling in. Although we believe that important steps have been taken in this direction, there are still people who do not know us. Our idea is not that they know us in the Canary Islands, in our closest context, but in each of them.As a director, I would like to end my career in the office with the completed museum collection because I believe it will provide more opportunities for the institution to be better known and more people will come and discover us.It is an exciting project because there is no museum in the Canary Islands that is specifically dedicated to travelers and scientific expeditions which is A topic that Fundoro has been working on for more than 20 years, it is associated with very prestigious institutes in other countries, such as the Max Planck Institute from Germany. It is complex and difficult and there is a lot of work to be done.”

Is there a time to prepare all the rooms?
“My idea is that in 2024 the ensemble is completed. The first room is practically ready, waiting for the decoration to be completed, but there are still four more rooms: the room of volcanoes, geology, geology, botany, landscapes, nature, climatology and health, because at that time the Canary Islands began to Appearance. It is an ideal destination for people with certain diseases. There are already people working everywhere. We are doing well at the moment and I think we will succeed. The idea is to find the resources to place the staff and that the room is always open.”