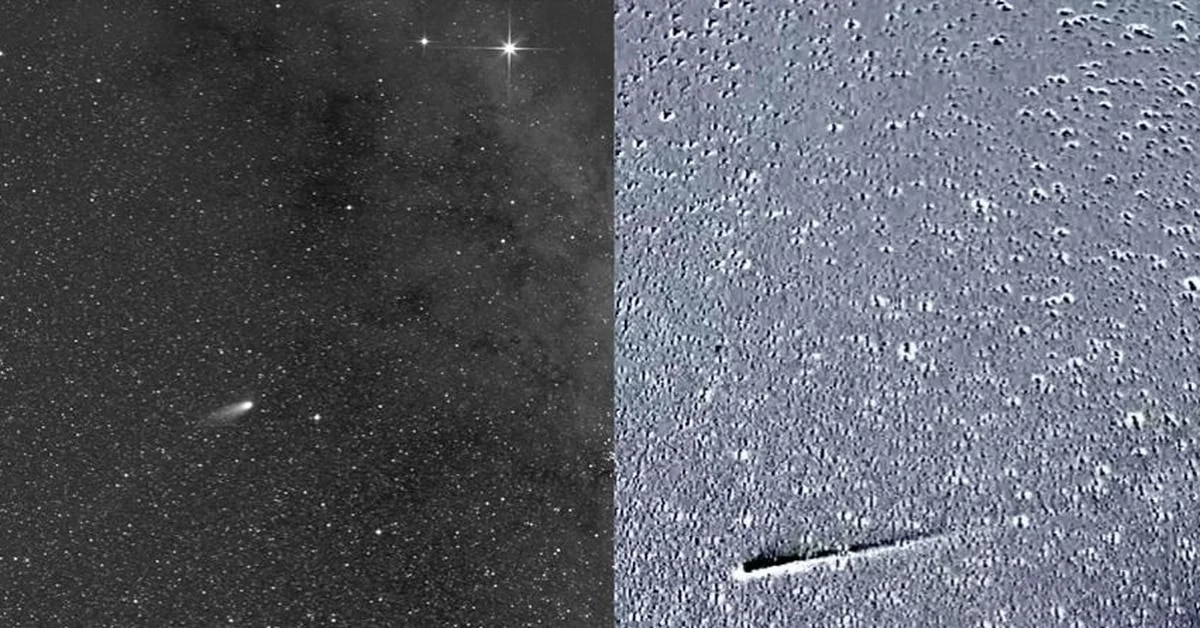 Two spacecraft watching the Sun captured these views of Comet Leonard, a kilometer-wide mass of dust, rock and ice in space that approaches the Sun.

The upper right image was taken by the SECCHI/HI-2 telescope aboard NASA’s STEREO-A Observatory, which has been observing the comet since early November. The Difference Image was created by subtracting the current frame from the previous frame to highlight the differences between them. The images of the differences are useful for seeing subtle changes in Leonard’s ion tail (the path of ionized gases flowing from the comet’s body or nucleus), which gets longer and brighter at the end of the clip (https: /www.nasa.gov/sites/default/files/thumbnails/ image/stereo_c2021_a1_leonard_hi2a_20211214_v5.gif).

On the other hand, the image on the left, frame from a video (https://www.youtube.com/watch?v=ne4j0H2_vAM), taken between December 17-19, 2021 by the onboard Heliosphere Imager (SoloHI) The ESA/NASA Solar Orbiter, showing Comet Leonard diagonally across the field of view with the Milky Way in the background. Venus and Mercury also appear in the upper right, Venus appears brighter and moves from left to right. During this sequence, the solar probe moves into a side view of the comet, revealing more of its tail. SoloHI will continue to monitor the comet until it leaves its field of view on December 22, 2021, NASA reports.

Comet Leonard was discovered in January 2021 by Gregory Leonard, who saw it in images taken from the Mount Lemon Observatory in Arizona. Its closest pass on January 3, 2022 will take it within 90 million kilometers from the Sun, just over half the distance from Earth. If it didn’t disintegrate, its trajectory would throw it into interstellar space, never to return.