The idea is to be competitive at all times. 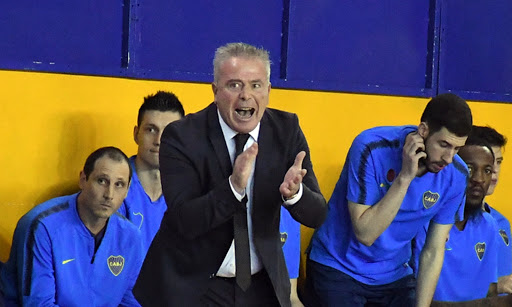 The New Year begins on Villardebo Street, but this time the ship turns. Guillermo Narvarte was announced some time ago as the new coach of Atletico Juice, and the Argentine talked it all with Básquet Total.

What attracted you the most about the Goes show?

The sports show was good. There’s always a mathematical and economic show in this, and a scenario in which a family context is within it. The scenario presented at that time, and combining all these variables, concluded that it was both possible and very tempting. Some areas have also been professionalized. In the past five years, the club has managed to establish itself in the first category of football in Uruguay and to be in good financial health, so the next step now was to professionalize the sports fields and gradually improve that image.

What club did you find in terms of infrastructure and facilities when working?

We arrived at a time when the pandemic had rendered the club unable to function and remained closed. From there, a project has already begun to improve some areas, including the infrastructure, such as the bodybuilding gym. Everything was complicated because the first month we were working outside due to increased sanitation protocols. Today we are already working in the field with quietness and the idea of ​​improving the structures.

Looking at the names, Goes appears to be short on paint packaging. Do you consider it this way? are you worried?

We have four players in the indoor match, and they all have different qualities. We want them to be able to find their best expression in a tournament that will be different from what it usually is. There is also teamwork and I think that all teams in one part or another have a deficit, and here lies the advantage of each fund in hiding that part and enhancing its qualities.

There are very good versions of Mike Bruesewitz. What can you tell us about that?

Mike is a player with a career in European leagues, and most recently came from playing in Mexico and Puerto Rico. It is about fulfilling a specific role. It’s not that the team is going to revolve around it or anything like that. I don’t like talking about single players, they all play a team role and will have to work in that context. He is perhaps the least known of the three aliens, so maybe there is a different expectation, but it is the same one that other players should have, be they foreigners or citizens.

Could Goes have the ability to extend spin at his under-23 years?

I think so. Here there is a truth, we need to have a U-23 team involved because eight-player rotation seems a bit too small to me. It is imperative that they, first and foremost, integrate with other young people to be able to give them better size and quality of work on a daily basis. From there, they can be able to help the team extend their rotation period into match days, and they can demonstrate their ability to compete. They cannot play to play, they have to be trained, so we will try to be able, with Joaquin Borallo and Felipe Rodriguez as leaders in this field, to find solutions to be able to leave the team with more tools.

What is the goal of the team?

The goals were changing. Work is not only mathematical, but structural and logistical as well. The maximum Goes reached with this league format was the quarter-finals, and in the last two seasons they did not qualify for the playoffs, so these are the floors we set to beat; The first place among the eight, then the step to the quarters. Today all that has changed, the tournament is different, and even for everyone it is a very difficult formula to predict. The fact of playing without an audience is a deciding factor and an experience that some players may have had, but not all of them. The idea is to be able to compete at all times, as all teams will be playing the qualifiers, essentially to be at our fullest potential when it comes time to play that stage.

In your opinion, what does Uruguay lack at the national level to be able to position itself on the more hierarchical levels of American basketball?

It might seem disrespectful to deliver a valuable league referee which, although I’ve watched it and watched matches recently, I just arrived. I can see that today they are working with young players, and I think that it is in the idea of ​​creating a substitute and having them participate as we have seen in the last windows.

What do you think of Robin Magnano?

It is a great reference for Argentina coaches. He is among the 5 best coaches in Argentine basketball history and logically ranks very high internationally. All this is not just because he achieved a gold medal, this honor does not start and end there, but in all the places he has shown, not only to be a great coach, but also a great coach. Robin continues to make an imprint on all of Argentina’s coaches and I’m very grateful for that.

A message to Joyce fans …

We don’t know if we can make mathematical promises and generate false expectations, what we can guarantee is that we work every day, and that there will be an important sense of belonging. We will be very happy when things are going well, and very sad when things go wrong, but we will be calm to let go of it all. We intend to be appreciated for that and to accompany us as they always do behind searching for the best for the team