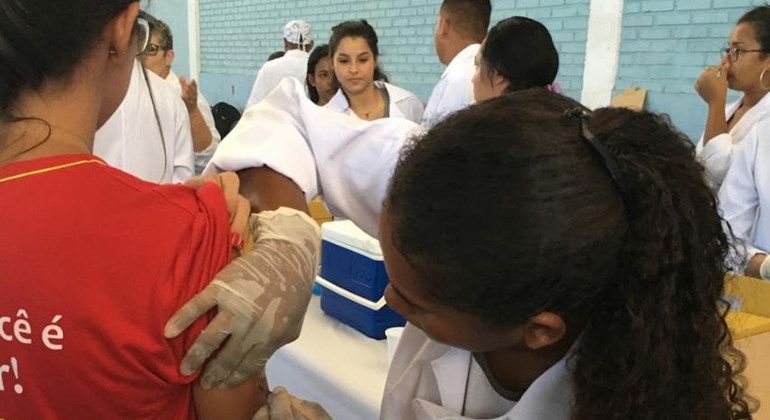 The World Health Organization I was notified, Thursday, of the appearance of seven cases of yellow fever in Venezuela, of which six cases correspond to people who have not been vaccinated against the disease. The case’s episodes were confirmed by lab tests on September 23 and 24.

Of the infected, three people did not show symptoms of the disease, while the remaining four suffered from fever, and one also suffered from headaches and eye pain, among other symptoms.

The first reported case was of a young pregnant woman with a history of yellow fever vaccination. Of the remaining six cases, five were male and ranged in age from 24 to 82 years. So far, no deaths have been reported among the confirmed cases.

The most likely site of infection was a narrow, rural area south of the municipality of Maturín in the state of Monagas, which is located in the northeastern region of Venezuela.

The UN health agency has also reported ten cases of the disease in non-human primates, seven in the same state and three in Anzoategui.

A lifelong vaccine against the disease

Yellow fever is an acute viral hemorrhagic disease caused by the yellow fever virus and transmitted by infected mosquitoes of the genus Haemagogus and Sabethes, as well as by a species of urban mosquito, Aedes aegypti.

Yellow fever infects both humans and non-human primates and has the potential to spread rapidly causing a serious public health impact in unvaccinated populations.

The disease can be prevented with a single dose of Yellow fever vaccine that provides lifelong immunity.

Venezuela is considered a high-risk country for yellow fever with endemic transmission. Vaccination coverage is not optimal, which creates High risk of transmission and amplification of the disease in the unvaccinated population.

‘Alarming’ surge with onlookers on COVID-19

The World Health Organization considers the increase in the number of cases in humans and non-human primates since August “alarming” due to the continued high viral circulation.

Since the vaccination campaign began in November of last year, immunization coverage in preferred states has reached 82%. However, vaccination coverage in Monagas State is low, so a large portion of the population remains at risk and Communication must be intensified, especially among at-risk groups.

In addition, the UN agency has warned that all endemic and high-risk yellow fever regions and territories are also experiencing ongoing transmission of SARS-CoV-2, the virus that causes COVID-19.

It is recommended to vaccinate ten days before traveling to Venezuela

In light of this scenario, WHO has highlighted the importance of continuing to raise awareness of the need for yellow fever vaccination, especially in high-risk endemic areas with a favorable ecosystem for yellow fever transmission.

Therefore, vaccination coverage should be increased especially for people People who live and work in forested areas and are exposed to infected mosquitoes Of the genera Haemagogus and Sabethes.

Likewise, it should increase among indigenous, immigrant and other vulnerable populations who tend to live in densely populated urban areas and are at risk of transmission by the Aedes agyepti mosquito.

Finally, she recommends vaccination for All international travelers over 9 months of age at least 10 days before you travel to Venezuela, although the South American country does not require any certificate of immunization from travelers.