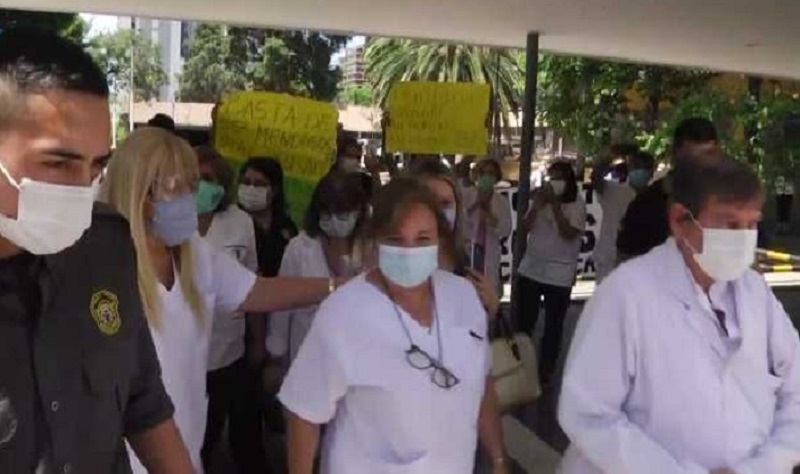 A year after Governor Mansour violated the agreement and canceled the incentive clause to freeze salaries for health workers, his ministry continues to harass essentials.

Yesterday, the nursing workers from the health center were notified of their expulsion from the hospital and an administrative penalty was imposed for transferring them to various health care centers, because they showed their demand for better salaries and better working conditions from the minister. Shahla during his recent visit to Zenón Santillán.

SIPROSA executives have provided enough evidence that they are leading an organization that persecutes and harasses its employees to keep them in disciplined silence, stifling all kinds of freedom of expression. The modus operandi consists of persecution through social networks, hospitals, and later on vacation times, shootings of transfer decisions or administrative summaries of workers who are politically unbiased or who complain about the system’s grievances.

This time, nurses Alfredo Mina and Silvia Posadas were chosen to certify the Minister’s persecution maneuvers. The nurses have been notified by decision signed by SIPROSA’s medical secretary, Luis Medina Ruiz, and attorney Mosesera, and the nurses will be expelled from Xenon Santillan Hospital and summarized on the assumption that both of them “collided with the vehicle that was carrying the minister. Last December 3rd.

Both nursing personnel have been identified as targets of discipline to attempt to drown out the claim of hundreds who chew dissatisfaction with employment status and salaries in health.

With the cynicism of SIPROSA’s brutal behavior, they argue that “hitting the minister’s car is a lack of decency and a serious insult”. Of this dangerous class, which expresses concern for the safety of the car, the existence of a “double moral and ethical tape” is demonstrated by SIPROSA officials.

This new attack on essential workers, against those who have put the body in the plague, is finding a collective ostracism of the thousands who say “No health persecution!”

Today, Wednesday at ten in the morning, the workers of the Centro de Salud Hospital are calling for a meeting to discuss the plan of struggle and to avoid persecution and expulsion of comrades.. In times of harassment of all workers, the unions have the decisive task of taking the initiative to confront these attacks, and establish rallies in all hospitals to continue the struggle plan of the base, because this anger must be stopped. If they touch one, they touch everything!

If you are from Tucuman: Connect with PTS on the left front or with Pan y Rosas in your work, place of study, or area.

See also  Could Francis become another pope emeritus due to his health problems?