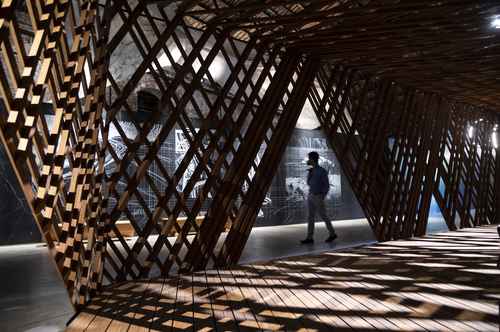 Venice. The Venice Biennale of Architecture, which opened on Saturday, measures post-pandemic and coexistence, but also displacement, conflict, environmental disasters and the advocacy of a better world.

The largest architectural event in the world, which should have been postponed last year due to the health crisis of Covid-19, was opened to the public on Saturday and will remain until November 21 with strict health measures, such as social distancing, the use of the mask, a mandatory route and a limited number of people.

With the title How will we live together? (How do we live together?) Lebanese architect Hashem Sarkis, curator of the 17th edition, made architects think about the future and its challenges, in one of the most difficult moments in modern history, after entire peoples, rich and poor, were forced to stay for months in their homes due to the spread of an unknown virus.

The Dean of the School of Architecture and Planning at the prestigious Massachusetts Institute of Technology is convinced that architects can contribute to managing personal and collective space to achieve the necessary, more urgent coexistence with the pandemic.

This is the main theme of the Biennial, with 112 architects and studios invited from 46 countries and 63 national pavilions, spread over the Giardini spaces (gardens), the colossal rooms of the Arsenal and some areas of the historic center of Venice.

See also  Why is science essential to our culture?

This year, the exhibition is also well attended by African, Latin American and Asian countries. Grenada, Iraq, Uzbekistan and the Republic of Azerbaijan are participating for the first time.

The contributions of the invited architects and the countries participating in the event will also be online, aiming to reach the whole world through new technologies.

Divided into five themes: among various beings; Like new homes. As emerging societies; Across boundaries, and like a planet, the world of architecture explores, analyzes, thinks, experiences and lives.

Is the post-pandemic phase the beginning of a new era or just a passing phase?

When touring the 3,000 square meters of Arsenal, ancient Venice shipyards and garden pavilions, the topic is addressed through installations, videos, ongoing interventions, projects and ideas.

Virtual maps, giant wooden models, interactive machines, and slum designs in Latin America are all propositions that question the coexistence model of the future.

The Spanish Pavilion of young architects is Domingo Gonzalez, Sofia Pinheiro, Andre Guizdala and Fernando Herrera. suspicion, Reflects, in almost every way, an art installation on the past and the future.

Also Mexico, with 12 suggestions on Displacement, While eyes focus on the Israeli flag, with special vigilance due to the current conflict.

The Biennial awards a special Golden Lion Award to the late Italian-Brazilian architect Lena Bo Bardi (1914-1992), who designed, among others, for the prestigious São Paulo Museum, a symbolic public venue, while the 83-year-old Spanish architect Rafael Moneo received At the opening ceremony, the Golden Lion Job Award.