Pope Francis shows the Bible as Sidra from Qaraqosh, Iraq 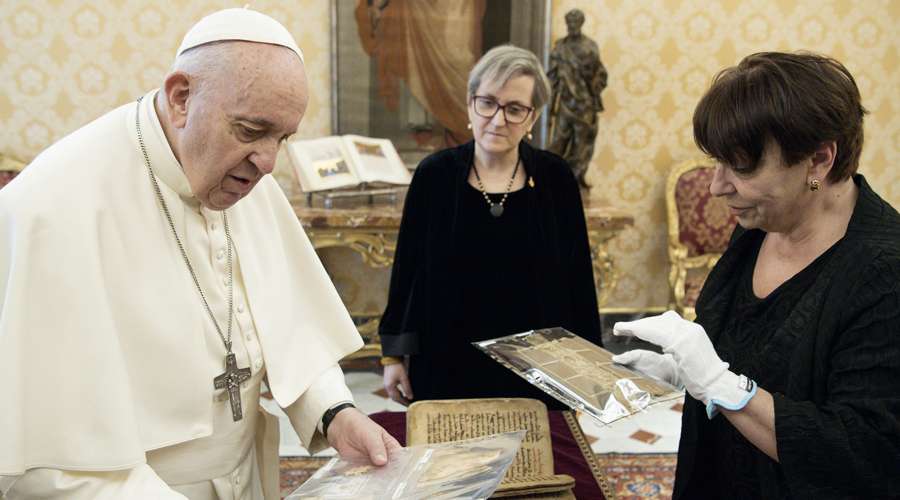 Pope Francis was able to appreciate in the Vatican a sacred book written in the Aramaic language, which was saved from the Islamic State’s invasion of Qaraqosh in Iraq, and was recently restored in Italy.

This is the “Sidra” holy book, which was written in Aramaic around the fourteenth or fifteenth century, and contains ritual prayers for Easter and the Holy Cross.

The Bible belongs to the Syriac Christian Church of Medina Qaraqosh in the Nineveh Plain, which the Pope will visit next March.

Meeting with a small group of restaurants from the Federation of Christian Organizations for International Voluntary Service (FOCSIVOn Wednesday, February 10, after the public interview.

The manuscript was saved thanks to the “deception of some of the priests of that city” in the face of the “iconic and anti-Christian outrage” of the Islamic State group that swept that land from 2014 to October 2016.

In January 2017, journalists Laura Aprati and Marco Bova found the Bible that was in Erbil and was then handed over to the Archbishop of Mosul, Monsignor John Boutros Moshe, in the hands of LA FOCSIV volunteers.

Later on, the book was taken to Italy for its restoration which lasted about 10 months since it was in very critical conditions, requiring a preliminary examination and linguistic comparison with some volumes from the same period preserved in the library. The Vatican Missionary.

In the near future, the Bible will be returned to the Syriac Christian Church in Qaraqosh.

FOCSIV President, Ivana Borsuto affirmed that “restoring the holy book of Qaraqosh is part of the commitment that the Union has devoted to rebuilding the social fabric of a region like Kurdistan.” An Iraqi and an Iraqi. “He added that the possibility that the people of the Nineveh Plain could continue singing in the Aramaic language with this book will remind everyone that” another future is still possible. “