The history of the “space doctors” and their strange disappearance 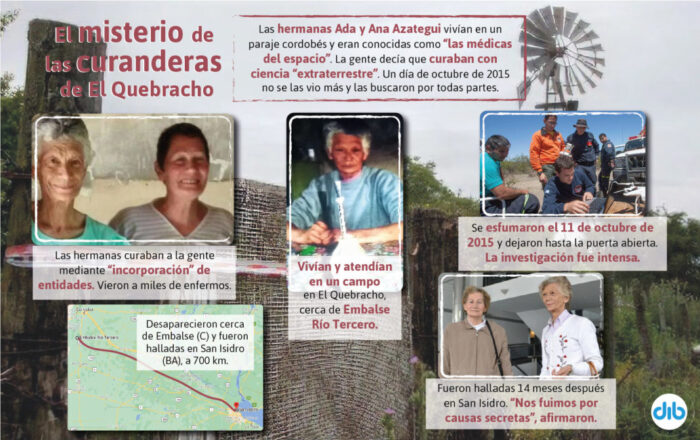 Halfway between Río Cuarto and the capital of Córdoba, near the town of Impales, is a place called El Quebracho. In that area, in a field about 500 meters from the road, three brothers with the surname Azategui lived for many years. There were two women, Ada and Anna, and a man named Paulino. The sisters had healing powers. They were called “Space Doctors” and their powers were said to have extraterrestrial origin. In September 2015 Paulino passed away. A few weeks later, Ada and Anna disappeared: the door to the house was left open, as if they had gone out for a walk. The only thing missing was the silver mate with which they always received patients. They were searched for a year by heaven and earth, until they appeared safe and sound in a house in San Isidro, on the outskirts of Buenos Aires. It is still unclear what happened to them and why, but they confirmed that they were “not allowed to leave” and that they were “monitored”.

This story began in the 1990s, according to a family friend who told the press. They were imprisoned in Rio Cuarto for unclear reasons and “according to Ada, he was there in prison when they first saw the ‘Space Doctors’ who told them they could get them out of there but on the condition that they work with them without leaving the house. They accepted and when they came back there was a squad of the military taking care With all their belongings. There they begin to heal.”

As if it was an organization, each brother had a role. Paulino (who died at the age of 76) took many cars with patients – they say later, they came to see about 50 thousand patients in those years – and Anna (currently 70) watched the pictures presented for her as it appears on TV, It was Ada (74) who treated the patients through a process called “establishment” in parapsychology. The woman was concentrating, breathing deeply and when she opened her eyes the person speaking through her was a German doctor.

According to the testimonies of neighbors, among the patients of the “space doctors” were a former president of the Nation and a judge who was a member of the Supreme Court of Justice. Meanwhile, they healed without getting anything in return; They accepted food only from patients, who more than once saw round footprints on the ground associated with landing unidentified flying objects.

Beginning of the End

Paulino passed away on September 30, 2015. The sisters were last seen on October 11. On the fourteenth day another sister, who lived in Rio Tercero, passed through the country and found neither Ada nor Anna anywhere. The door to the house was open, but nothing was missing, except for the silver which they usually used when receiving the sick. .

The police searched for them everywhere. They used dogs – which they said were afraid of mysterious stick figures in their yard – and something new at the time: drones. The intervening prosecutor, Andrea Heredia Hidalgo de Rio Tercero, pursued all possibilities. Raids in neighboring houses and fields, raids, searches of health rooms in the area.

Various hypotheses began to be mentioned, among which emerged from a double crime for economic reasons – they assert the existence of an untapped gold mine on the field – and, taking into account the nickname they were given, they were kidnapped. by foreigners.

The mystery continued, and the investigators began to despair. Where were Anna and Ada?

Until 14 months after their disappearance, in December 2016, the two sisters were found during a home search in San Isidro, north of Greater Buenos Aires. They said they were in good health and living with people who were cared for in El Quebracho.

These people have been accused of “unlawful deprivation of liberty”. Later, the sisters themselves told the press that they left the field of their own volition and that in the San Isidro house they were “rebels”.

However, the premise of the claim was that these people could have “exploited” these women, who “could have a defective will”.

In an interview shown on La Voz, Ada and Ana Azategui gave details of what happened to them, in a plot that sounds like a story from Adolfo Bioy Casares.

“We had to leave the square for the reason that the prosecutor’s office is investigating,” they began, insisting that they left of their own free will, although “the reason is a secret between us. You can’t take it anymore. We decided to go for sure. We had nothing left, not even a brother’s piece.” that was with us. We had nothing to expect.”

“We don’t want to go back,” they continued, and said they would stay “in Buenos Aires; we’ve formed a new family, from the heart, you understand us.”

The sisters gave unpublished details of their performance in El Quebracho: “We worked in a field hospital licensed by the United Nations. They didn’t let us out. When the hospital gets up, we are forbidden to work and they release us.”

During the months when their whereabouts were unknown, they were unable to treat patients: “How would we help people if we were banned? Do you think we weren’t under surveillance?”

They explained that the people who were investigated “were our patients, and they went to our hospital.” And about his “disappearance”, they emphasized that “we had to cut off communication because we had already left. If there were trustworthy people at the time we had to leave, we would tell them the secret reasons.”

Five years after his “reappearance”, Ada lives in the valley town of Calamuchita and her sister Ada lives in a nursing home in Buenos Aires. The investigation is on hold and the two sisters have never set foot again in their field in El Quebracho, where, for these “secret reasons”, they have not left for two decades. (DIB) mm