Vacationers flock to the beaches confident of vaccination 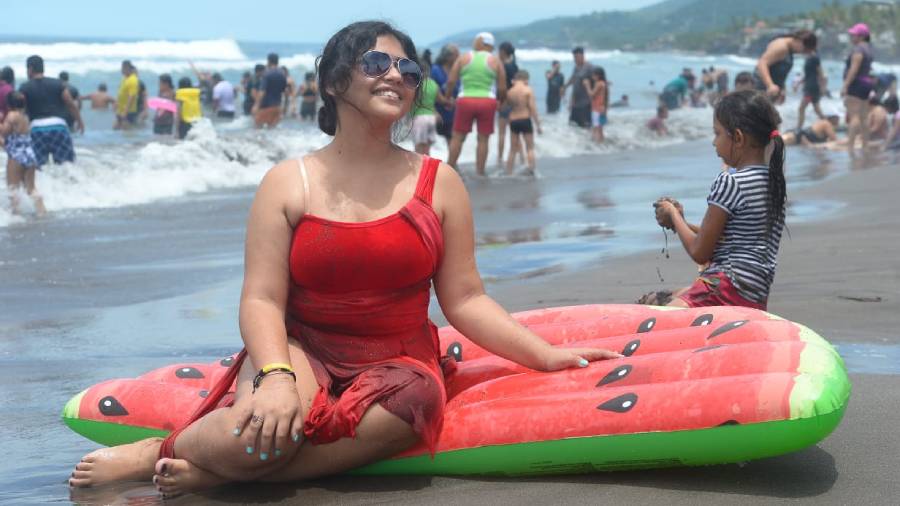 Wearing masks outdoors is minimal, but merchants are asking to keep procedures.

Hundreds of Salvadorans have come out to enjoy their August vacations at the country’s most popular tourist spots.

The beaches of La Libertad were one of the main areas that Salvadorans visited on these holidays.

On Uncharted Beach, the influx of people was huge during a tour by this medium last Friday, August 6.

Concepción de María is a woman who has been working on the dock in Puerto de La Libertad for 10 years and confirms that some visitors to this tourist area are comfortable with the biosecurity measures, as many do not wear masks.

As a suggestion, Maria recommends the general public wear two masks “one for use and one for backup in case you lose your first.”

The atmosphere in the area was 100% vacation and family groups did not hesitate to take advantage of the climate to enjoy the heat of the sun and the waves of the Salvadoran beaches.

According to other traders from the various beaches of La Libertad, this year, compared to the previous one, a greater influx of domestic and foreign tourists was observed.

Among the main concerns of Salvadorans is to be able to enjoy their vacation in August without the risk of contracting Covid 19.

Because of the high risk of infection posed by the conglomerates, businessmen and tourists alike are claiming to put biosecurity measures in place.

According to Ernesto Borja, who is in charge of a restaurant in Playa La Paz, in La Libertad, most visitors to the place respect the precautions inside the building and use masks and alcohol gel.

On the other hand, Angelica, a 19-year-old American girl, is visiting El Salvador for the first time and recommends that Salvadorans use masks even though they are vaccinated, because the most important thing, even if they are on vacation, is to maintain health.

However, doubt and irresponsibility always appear when consulting some citizens. A fisherman who asked not to be identified confirmed to El Diario de Hoy that although he uses the mask because it is mandatory, “he does not believe in the disease because neither he nor any member of his family has suffered from it.”

Attention to emergencies
As in previous years, it was not absent from the presence of emergency agencies to take care of emergencies in tourist areas.

In the final hours of the weekend on the Salvadoran coast, volunteers from the Red Cross treated two critically ill people on the beach of Maghuwal because the boat they were transporting capsized.

Read also: What do the alpha, gamma and lambda variants of COVID-19 already in El Salvador mean?

As of Saturday morning, the Salvadoran Red Cross has rescued 23 people, far fewer than 77 in 2019.

As the holidays progress, the attendance of family groups to the beaches increases.

Fausto Fuentes, a Red Cross rescue worker, hopes that these activities will not have an impact on health issues at the end of the holiday period, since, in his opinion, traders and family groups have maintained biosecurity measures.