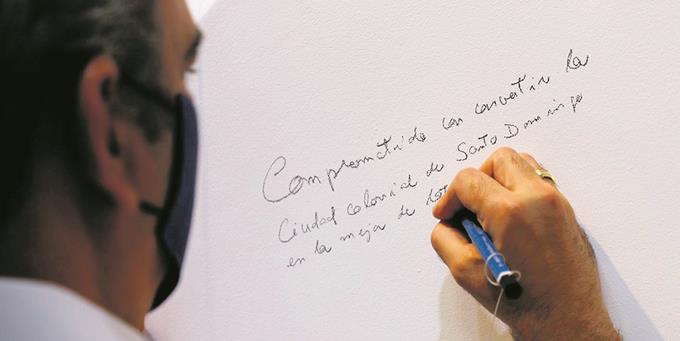 President Luis Abinadir started yesterday the second phase of the tourism promotion program for the colonial city of Santo Domingo, during an activity that included a tour of various places in this historic region.

“We are implementing many projects that the country needs to restart the economy. It is time for a colonial city.”

The President emphasized that with the Ministry of Tourism and the Office of the Mayor of the National District “we will make this the best colonial city in all of Latin America.”

The project is to be implemented over a period of six years, with $ 90 million in funding by the Inter-American Development Bank (IDB), an entity that has also disbursed $ 30 million that was used during the first phase.

The investigation is responsible for the Ministry of Tourism, in coordination with the Office of the Mayor of the National District and the Ministry of Culture, to give continuity to the rehabilitation of the city, in terms of culture and tourism, as well as economic and urban ones.

As well as by Director of Police, Major General Edward Sanchez; Director of the Specialized Tourism Security Corps (Cestur), General Juan Torres Rubio; President of the National Association of Hotels and Restaurants (Asonahores), Raphael Blanco, and representative of the Islamic Development Bank in the country Miguel Coronado.

“Today begins the resurgence of the colonial city under the leadership of the government of President Abinadav,” Collado said, referring to the promotion of tourism and the transparency with which the project is managed through the Islamic Development Bank.

Before the start of the official ceremony, President Abinadir visited Borjela Palace where he held a private meeting and then began the tour from Ozama Castle.

The president travels by golf cart, and continued his tour with the opening of the Royal Shipbuilding Museum, where the President received the keys to the “Museum of the Caribbean Sea”, whose museum focuses on navigation, maritime trade and archaeological discoveries of underwater origin. .

The next stop is Las Mercedes Street on the corner of Hostos, where the President painted the first house symbolically as part of the “Pintando tu Ciudad” home improvement program, which aims to improve housing conditions in the neighborhoods. The northern region of the colonial city.

The Saviñón building, located on Calle del Conde in the corner of José Reyes, was the last point of the tour, where the permanent exhibition “Zona Colonial Viva” was presented.

The program includes the revitalization of heritage buildings and public spaces in the colonial city. San Francisco Monastery will intervene. Ribera del Ozama, Museo del Alcázar de Colón, Museo de las Casas Reales, Museography of Santo Domingo Fortress, and the Cathedral Museum will be buried in addition to the wires. S $ 676 million has also been proposed to improve the homes and living conditions of the residents of the northern region of the colonial city.